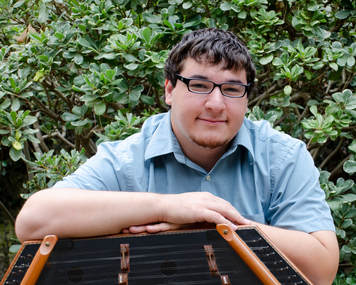 Biography:
​
​Zachary Konick is a composer, percussionist and hammered dulcimerist, currently based in San Diego, California. He received his BM from the University of Maryland, where he studied composition with Dr. Thomas DeLio and Dr. Mark Wilson, and received his MM degree at the University of South Florida in music composition, where he studied with Dr. Baljinder Sekhon and Professor Paul Reller. He has received notable performances of his works by the Birmingham Contemporary Music Group conducted by Oliver Knussen, the newEar Ensemble, the JACK String Quartet, the Ethel String Quartet, the Spektral String Quartet, the Quasar Saxophone Quartet, The Florida Orchestra, as well as a performance of his marimba solo Weaving, his flute solo Fragments by Alice Weinreb, and his consortium commission work Amalgam by Dr. Lee Hinkle. His piece Hollow for viola and toy piano was selected for performance at the 2017 Florida International Toy Piano Festival, and in the Fall of 2017, Konick was invited to perform his work Amalgam for a concert hosted by the Tampa based organization, Terroir. Mr. Konick also received the honor of studying with Roger Reynolds during a winter composition course at the University of California, Washington D.C. Center. As a percussionist, Zachary has performed in multiple musical theater productions throughout the Washington D.C. Metropolitan area and has served as a member of the McCormick Percussion Group, under which he has recorded music by composer Matthew Barber for Ravello Records. As a hammered dulcimer artist, Konick has studied with Maggie Sansone and Karen Ashbrook, and has taught the instrument in the South Florida area since 2016, and will be performing his original compositions for the Southern California Dulcimer Heritage Festival in September. In the Spring of 2018, Mr. Konick was inducted into the music honor society Pi Kappa Lambda. He will be pursuing his PhD in music composition at the University of California San Diego starting in the Fall.
Copyright © Zachary Konick, 2013. All music, sheet music, recordings, and this site are the sole property of Zachary Konick.